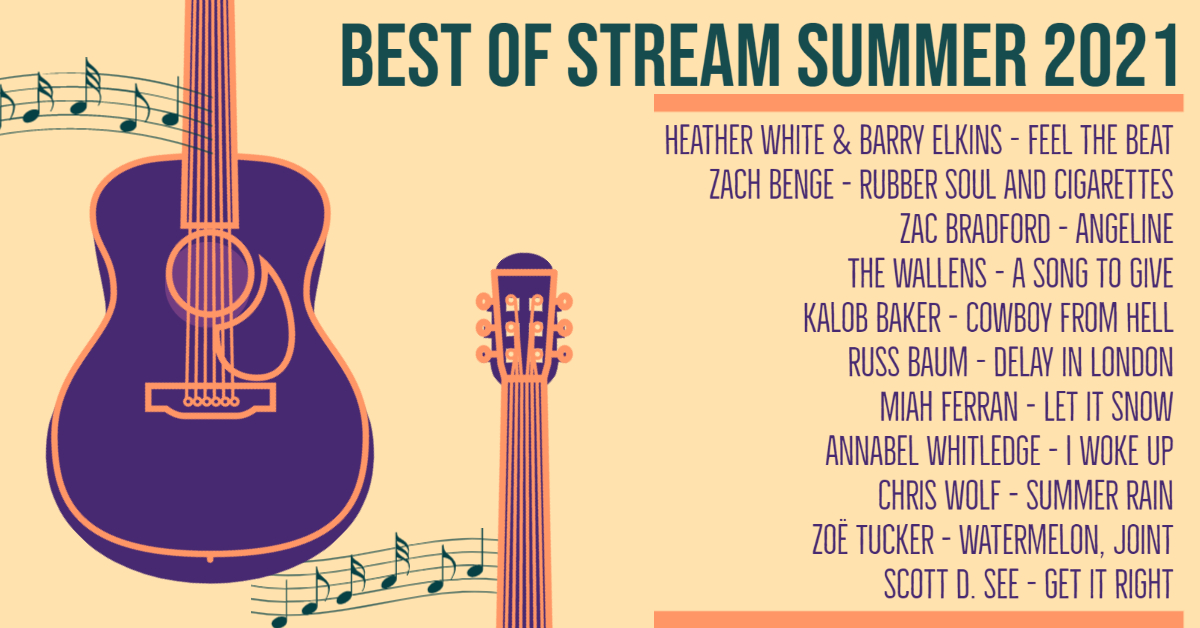 Hailing from southern Indiana, Brad was introduced to us by Rich Hardesty. His smooth vocals and country styling delivers a feel-good sound that is perfect for kicking off our Spring album. (Mandi made a triumphant family montage set to it.)

Jacob Lafever was introduced to us by Haley Jonay on a magical April evening. His rich, soulful sound captivates us and is a big hit with the patrons of the studio. Jacob comes to us from nearby Indianapolis, but his song Local Honey will appeal to regional apiarists and global music enthusiasts alike.

Amanda Webb is a classically trained vocalist who met her husband Brian at the Indiana University School of Music. Amanda’s powerfully expressive vocals and masterful piano are perfectly complemented by Brian’s smooth lead guitar. Amanda loves eggs but is growing weary of chickens in her flowerbeds.

Dakota Curtis has been featured on The Stream numerous times, and even inspired “Dakota Curtis Month” at Rainwater Studios in January 2019. Curtis delivers masterful lyrics and captivating songwriting that has inspired many covers. (His songs account for a large portion of fanboy Kenan’s personal repertoire.)

Kristopher returned to The Stream in 2021 for his second appearance. His humble spirit and engaging lyrics were a perfect fit for our compilation. We’re not sure if Kris knows how good he is. Be sure to tell him for us. We love this guy!

Haley Jonay wrote her first song at 7 and has been releasing music since the age of 16. Her music artfully blends pop and folk stylings for a sound that’s all her own. She is so awesome she even covered local heroes The Cox Brothers on her debut album. How cool is that?

A master of patch pants and a friend to dogs everywhere, Taylor Hernly has spent time both at the soundboard and on the stage at Rainwater Studios. Hernly’s deep, unapologetic tunes can be found on the newly-released full-length album, Sidewalk Preacher. Summon up the Hounds on social media and join Taylor as he plays his heart out for fans across the Midwest and beyond!

Originally from Louisville, KY, Luke Powers recently relocated just down the road from the studio. Whimsical yet philosophical, Luke underpins his lyrics and upbeat melodies with slick fills and leads. When not writing or performing, Luke occupies his time with custom woodworking and being weird on the internet.

Having recently relocated to Minnesota for luthier school, Jeff and Jenna were unable to join us for the showcase. However, their mesmerizing vocals can be found on the Spring BOS album which caught their last performance as “Jeff + Jenna.” The Stream from whence it was captured occurred on the Wednesday before they were wed in Story, Indiana.

Formerly of renowned Indiana band Push Down and Turn, Tay now performs and records as a solo artist. He also hosts a writers in the round and is active in the music community.

Lexi Len performs as a duo and with her band, Lexi Len And The Strangers. Her most recent album, which is self-titled, can be found on all the major streaming platforms.

Jason performs and records as a solo artist and with the Blankenship Band. He says his main gig is as a lead guitarist and band leader for the JC Clements Band. Jason is part of a strong family musical tradition. He hosts a writers in the round and is active in the music community.

Michael has assembled seven original tracks for his upcoming debut album, recorded at Rainwater Studios. He resides in Hope, Indiana.

Eric usually performs with his band South of 44, but he made an exception for The Stream. A prolific songwriter, Eric also volunteers as a sound technician at Rainwater Studios. On Monday evenings, he hosts a podcast called Will Dance for Biscuits and Gravy, which is dedicated to promoting local businesses.

Steve performs in many formats and previously fronted and recorded with the band Warm Bloods, based out of Bloomington, Indiana. His upcoming solo album will be released July, 2021.

Matthew performs solo and in the family jam band The Rodney Boys. He is taking a bicycle tour of Southern Indiana this spring and summer, playing alongside other local artists at various stops along the way. The tour includes several artists previously featured on The Stream including Steve Plessinger, Chris Wolf, Kristopher Garner, and The Hammer & The Hatchet.

Available at Weedpatch Music Company in Nashville, IN